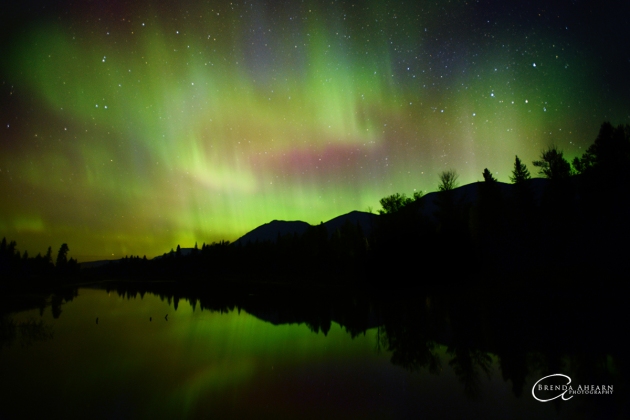 Before moving to Montana I had never seen the Northern Lights. The first time I saw them was because I got a text from a friend at the Flathead County Sheriff’s Office: “Northern Lights over Big Mountain.” That came through a little after midnight. I got up, raced out and started shooting. Mesmerizing. That’s what the Lights are. They sway and pulse and dance across the sky in colors and beats that are wildly beautiful and unpredictable.

Tonight I woke up at 1:39 a.m. and noticed the particular shade of green that indicates that outside the lights of the city, the Northern Lights are putting on a show. In a matter of minutes I had my keys, clothes, camera and tripod and was starting up the Jeep. The question is where to go…

If you have never seen the Northern Lights in Montana go to Glacier National Park. The dock at Apgar is one of the best viewing spots there is. One, it’s Glacier (you can never go wrong there). Two, you’ll have the benefit of the frequently smooth as glass Lake McDonald. Three, there are no annoying city lights or power lines to contend with. Four, there is that famous silhouetted horizon the mountains at the east end of the lake. It really is quite perfect. 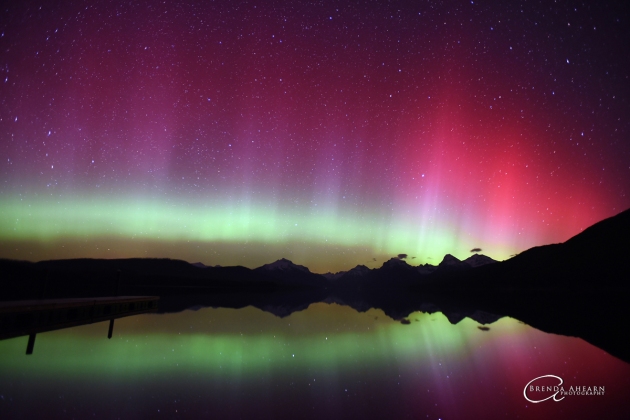 A view of the Northern Lights over Lake McDonald at 11:56 p.m. on Thursday, April 9, in Glacier National Park. (Brenda Ahearn/Daily Inter Lake)

Last year I took this photo of the lights from Apgar. The picture was a complete surprise and people responded to it in a way I never expected. So tonight I was faced with the question of whether or not to return to Apgar. The location is perfection, but would it be really any different than the last time I photographed there? It’s Saturday night, one of the nights when people can be out photographing the Lights and then sleep in the next day, so I knew I wouldn’t be alone if I went to Glacier. And one of the things I wanted was a shot different from what everyone else would be getting.

Years ago I was at a photography workshop and one of the photographers there was a shooter for National Geographic. He wasn’t a teacher, he was on a personal retreat and he didn’t talk too much. But I noticed the way he deliberately moved away from the crowd. He avoided the obvious shot and would hike much further to get something unique. In one of the few times I was brave enough to talk to him, he mentioned that he hated it when people followed him. He didn’t want to be copied, he wanted to find his own images and wanted other people to find what would speak to them. When I was a young photographer I didn’t really understand this. It made sense to me to follow him, after all, he knew what he was doing. Now that I’m a pro, I understand better. There is something powerful and magical about going you’re own way to find your own view. What you find may not match the perfection of the well known, but it will be your own. I wanted that tonight.

So, two roads: I could go with what I knew would work, or I could take off on an adventure and simply hope for the best. I went with the second option and it was so worth it.

Instead of going to Glacier I drove north of US 93. There is a lake called Upper Stillwater and it’s the name that made me want to seek it out. I wanted the reflection to double the effect of the Lights. I’ve seen photos of the Northern Lights from latitudes in the 50s and 60s. And the farther north a person is, the more the Lights seem to fill the entire sky. One day I hope to travel in those regions and see the Lights the way I have seen them photographed. From Montana, (based solely on my own experiences) the lights seem to pretty well hug the north/east horizon.

Since the lights aren’t going to overwhelm the sky here like they do up north, when I go looking to photograph them I go looking for north facing water. It’s not the easiest thing to find in the pitch black dark of night. But when you do find it, the water becomes a mirror. That’s what I’m looking for, that’s the shot I want. 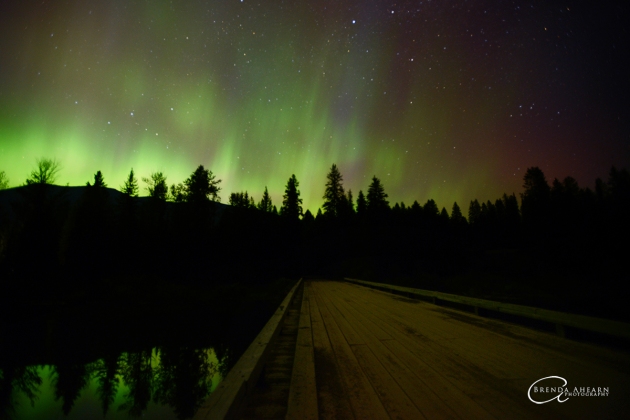 It is fascinating to stand alone in the dark surrounded by the sounds of the night under the light of the stars. In the coolness of the predawn hours my overactive imagination goes wild with fears of bears and wolves and mountain lions. But even those fears heighten the experience and make me feel more alive. When the Lights are out the stars create points of stillness that accentuate the speed of the solar winds pushing the lights across the sky. The sky dances and it is lovely.

These photos were taken with a Nikon D600 and a 17-35mm f2.8 lens at ISO 640 and exposed for 25-30 seconds. The location is the bridge over Upper Stillwater. What a spectacular night, what a perfect way to begin Mother’s Day. 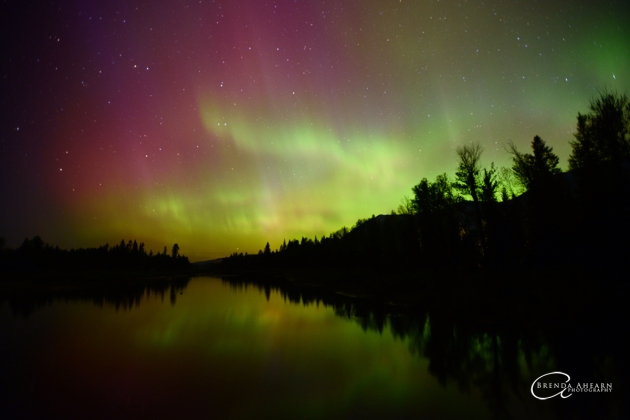 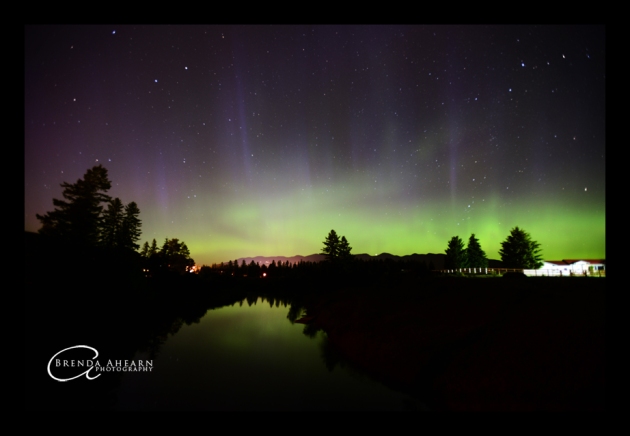 It’s 12:44 a.m. It has been an outrageously long day. The dancers are in town for the workshop. There are three more days of classes and dances to be prepared for. Life is outrageously good, but overwhelmingly busy. Then your phone starts beeping. This isn’t my normal alarm clock beep, and not the beep of a call coming in. It’s my work phone. And it is the loudest, most obnoxious sound I can find because this is where I get my text messages from dispatch alerting me to fires and car wrecks and all the other things I have to cover at the drop of a hat. I groan. Make myself get out of bed to get the phone. I keep my phone just out of reach because if I can stay in bed and “accidentally” turn it off,  I may not get out of bed at all. But the message isn’t from dispatch, it’s from a friend who works for the Sheriff’s Department. “Northern lights are over big mountain!” … Ok. … Go!

I have never seen the Northern Lights. I remember hearing of them when I was child, seeing videos of the dance across the sky and dreaming that some day I would get the chance to visit Alaska or Norway or wherever, so I could see them for myself. As it happens, Kalispell, Montana at 48 degrees North is north enough to see the Aurora Borealis. Still, I’ve been here three and half years with no sign of them. So when that text came in, suddenly it doesn’t matter that I am sleep deprived, or that the next few days are going to be exhausting. All that matters is I need to be outside, with my camera, RIGHT NOW!

I grabbed my clothes, boots, camera, and keys and was out the door in minutes. 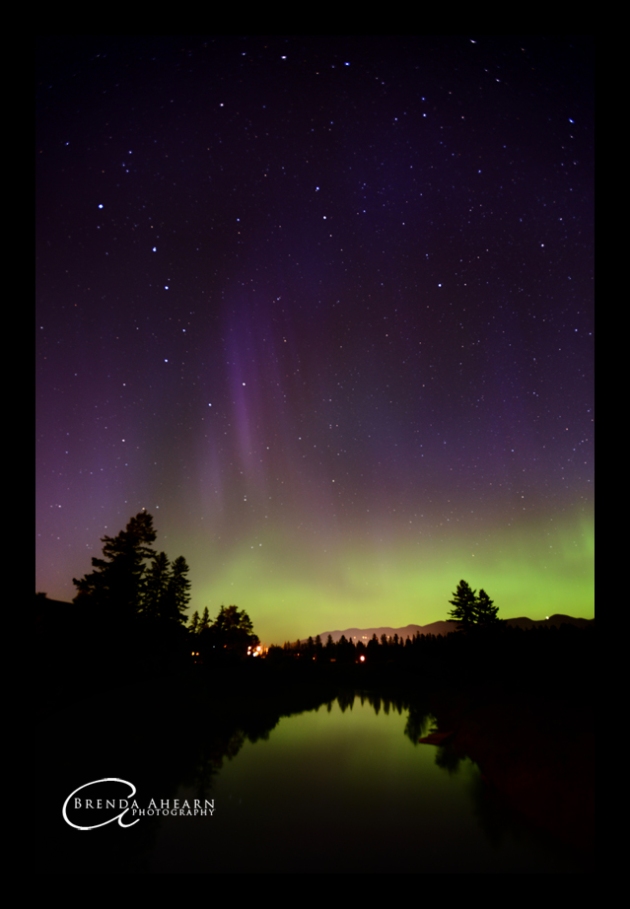 Wow. What a sight. From my back porch (which is near downtown) it was hard to discern the difference between the Northern Lights and the light pollution. Where to go? Answer: call the friend who sent the text. He sent me south of town toward Highway 40. I actually got on JP Road and this was where I got my first clear view and fell instantly in love.

As I said, I had never seen the lights, I had no idea how long they would last. That uncertainty led to some moments of silliness on my part. I was speeding and scrambling and not really thinking about compositions early on. Luckily there is a bridge on JP Road and as I crossed that I suddenly knew exactly what was needed — water. If the sky is gorgeous, find water to reflect the sky and voila! twice as much sky. This is an ancient photography rule. One I know well. It wasn’t until after I crossed the bridge that I figured that one out. But finding that bridge actually set the tone for the night. 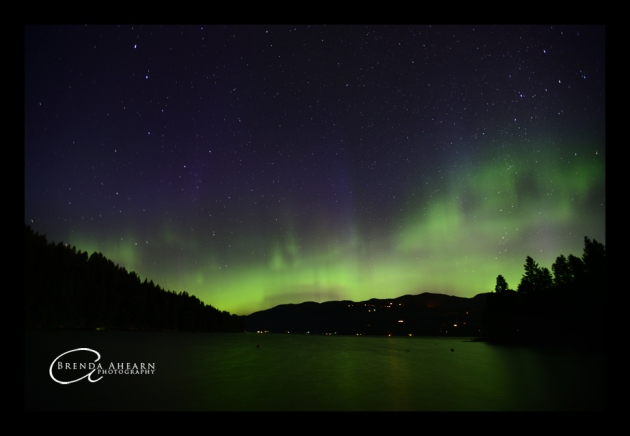 After JP Road, I went to Whitefish State Park. I have to admit I felt a little guilty about this one. To get to the beach, at 1:30 in the morning, you have drive through the camp ground. People are sleeping. People are missing the Northern Lights, but I’m not their alarm clock. Maybe they don’t want to be woken up in the middle of the night the noise of my Jeep engine and me stumbling around in the dark looking for the beach. Note to self: even the places I have visited before become uncertain and difficult to navigate in the pitch black dark of night.

As my friend had been able to see the lights from Bigfork (about 50 minutes south) I started wondering if I might be too close. That decision set the tone for the rest of the night. I was out until 4 a.m. basically working my way south to Kalispell and east. 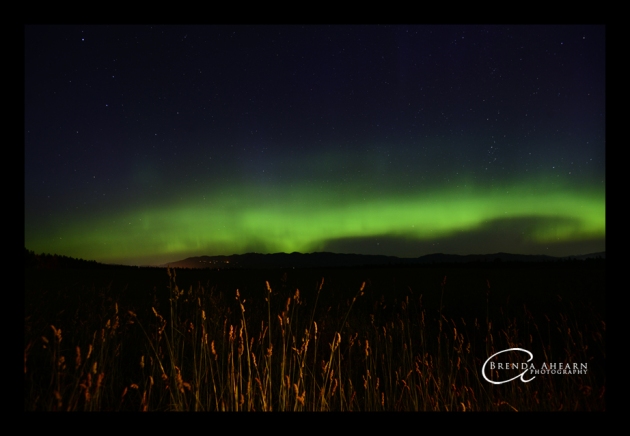 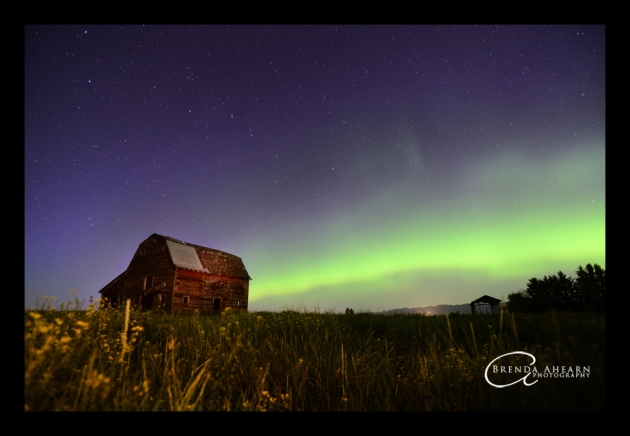 My favorite photo of the night is the next one… Actually, this is one of my favorite moments in my life. And it came at 4 in the morning. The sky began to pulse. I can’t think of a better word for it. It was as if the energy behind the lights was sending out waves or blasts that quietly electrified the sky and caused the Northern Lights to really dance. I have no words for this. I can’t really explain what I saw, or what I felt. It was a moment of a lifetime for me and one I shall never forget. There was, standing beside the retaining wall on the bridge on Highway 35 that crosses the Flathead River. This is NOT a safe place to stand. Especially at 4 a.m. when all is dark and the drunks are out. But this was the view I wanted and this was where the show became it’s most spectacular.

In most cases, photography is inferior to human vision. The eye can discern more than 200 shades of gray. Cameras aren’t that lucky. In slide film there are five f-stops between black and color. On negative film there are nine. Digital I’m told runs between 11 and 13. But there is something a camera can do that the eye can’t. It can collect cumulative light. Long exposures. All of these images were shot with a tripod, something I seldom do. The exposures ran from 30 seconds up to one minute. By letting the light play over longer periods it’s effects are made more visible. The Lights were incredible to see. Nothing like them in my life. The Lights on film are even more dramatic, even if they don’t convey quite the same level of power as the pulsing sky.

It wasn’t the rising moon that put a halt to the show. It was the dawn. This was the first time I can ever remember wishing dawn would hold off, wait… Of course, it didn’t. The sun continued to climb and slowly the white light of new day began to wash out the other worldly green.

And… I want more photographs.