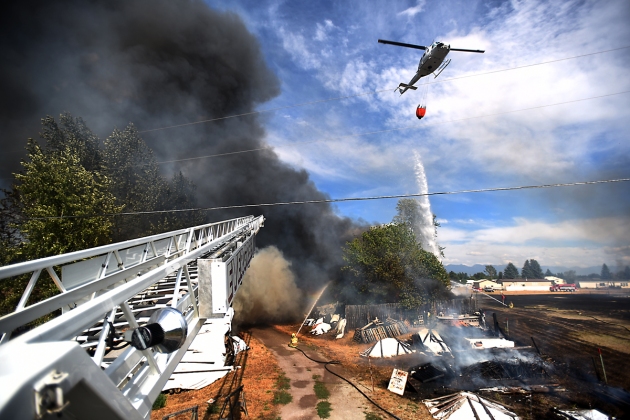 View from atop the Evergreen Fire and Rescue ladder truck of a fire on Mountain View Drive in Evergreen on Wednesday, August 5. The helicopter is from the Department of Natural Resources and Conservation. (Brenda Ahearn/Daily Inter Lake)

It doesn’t take spending a whole lot of time with me to realize that I consider those who serve in the military, in law enforcement, or as firefighters, heroes. They are the good guys (and girls) and they have my respect and admiration. In a way, they all remind me of my greatest hero, my father, Sgt. Michael James Ahearn, USMC.

In my career as a newspaper photographer I have been both blessed and cursed in my dealings with these groups. The blessing is that I get to work with them, get to know them, get to do my small part to show them in their daily lives serving their communities and not getting as much credit as I wish they did. As far as them getting credit and recognition, I get to help with that and I love it. 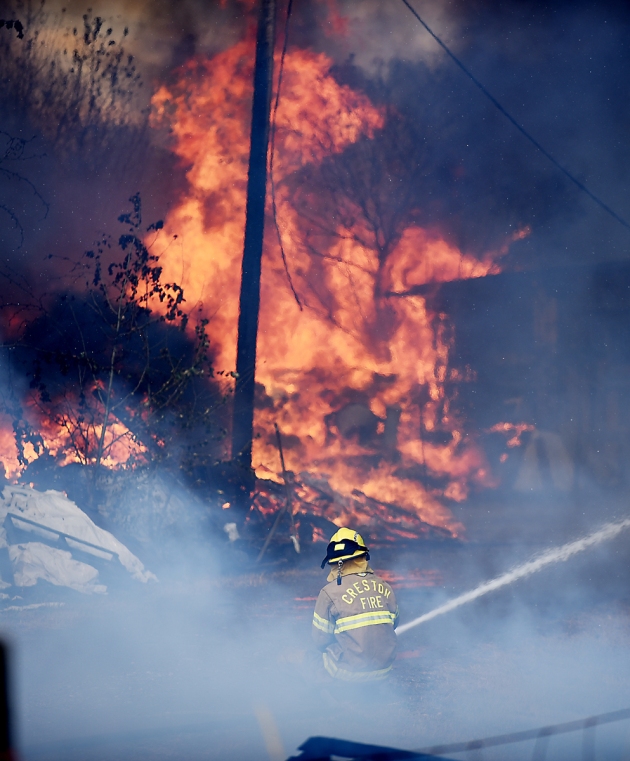 The curse is, military, cops and firefighters tend to have an aversion to members of the media. I don’t blame them for this. Most of them have either personally had a bad experience with biased, unethical journalists. If they haven’t lived through it for themselves, they have certainly been warned by their brothers that media people are not to be trusted. Again, I don’t blame them for this attitude, the sad fact is journalism and ethics don’t walk hand-in-hand so much these days. 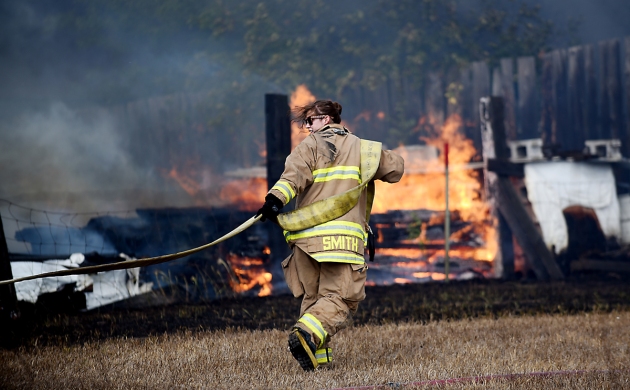 In the six years I have lived in Montana I have slowly but surely started making friends and allies amongst the local first responders. I don’t have a lot of active duty military connections yet, so for me, cops are the hardest. For a couple of years now I’ve been doing photos and ride alongs with members of the Flathead County Sheriff’s Office. I will never forget how joyful I felt when the team leader for the SWAT Team told me that every member of the team was on board for me doing photos of them. They decided to trust me. And I’m honored. And, just a few weeks ago a very stern (and a little scary) Montana Highway Patrol Trooper told me he appreciated me, the work I do, and the way I do my work. He made my day. 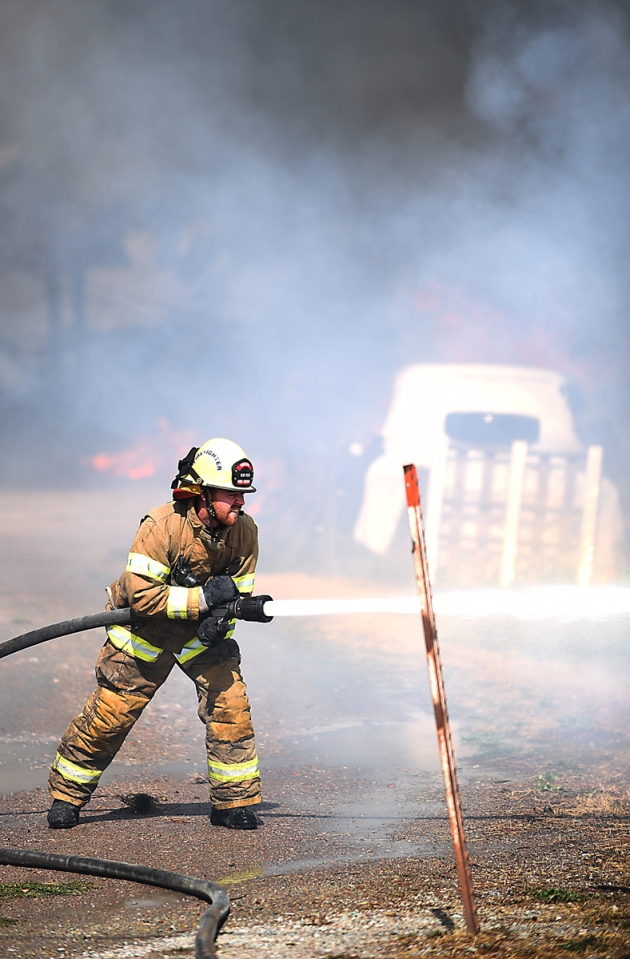 My editor Scott refers to my efforts to improve relations with these groups as the “charm campaign.” The newspaper likes it because over time I have slowly started to win over some of the locals. It takes ages, but it’s so worth it. 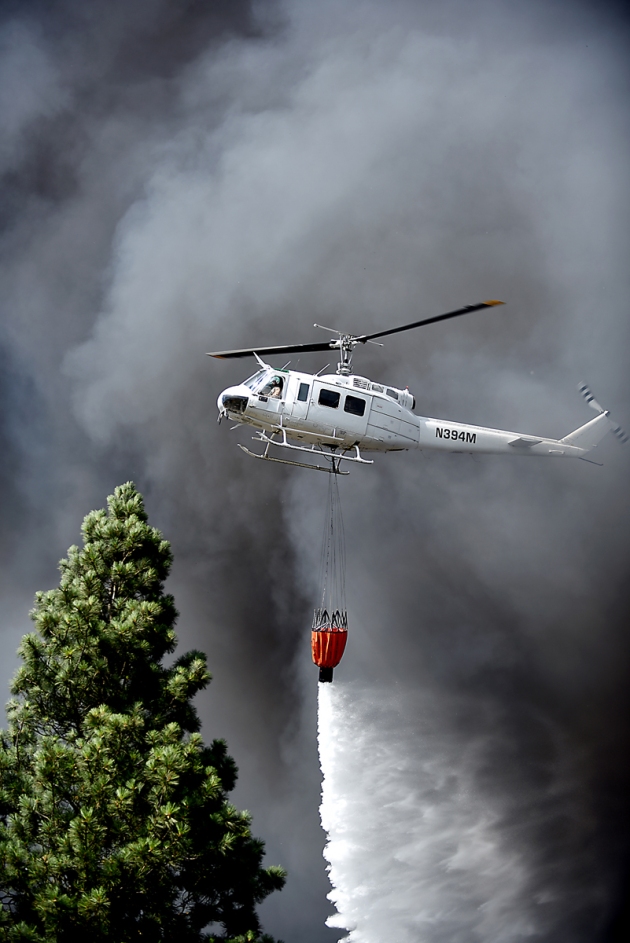 A DNRC helicopter flies through smoke to drop water on the scene of a massive fire on Mountain View Drive in Evergreen on Wednesday, August 5. Evergreen Fire and Rescue were joined by the Kalispell and Creston fire departments, the Flathead County Sheriff’s Office, forest firefighters and other first responders.
(Brenda Ahearn/Daily Inter Lake)

As a journalist its worth every effort because I get better photos and better access. When they see me, they know who I am, they know I’m not going to get in the way or stir up trouble and so they don’t have to question me. On the days when I am really lucky I will sometimes even get tips and texts letting me know what’s going on. I recently spent a full day and four nights riding with the Kalispell Fire Department documenting a day in the life…best part? Text messages when there is a fire I should get to. Love that! 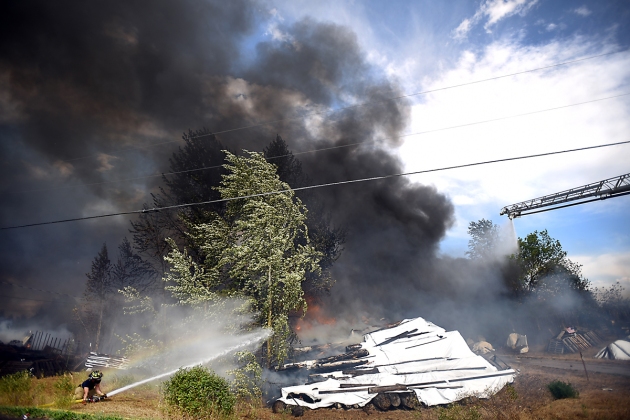 Firefighters are tricky… There are rules that make photographing them difficult. If a firefighter gets his name and photo in the paper, he or she will have to buy ice cream or pizza or tacos or whatever for the whole shift. I have seen firefighters notice me taking pictures and deliberately turn and walk the other way. Do you know how frustrating that is!!! I could strangle them for this! But even the ones who don’t want to be photographed, they’ll go out of their way to help get me the access I need for photos and to keep me safe while I’m taking pictures. Sometimes they say no when I ask. In fact, that happens quite a lot. But I ask for a lot. And they never seem to resent me asking the questions. Sometimes though, they say yes, and then I get photos like these. This fire was only 6 acres, contained due to the combined efforts of at least 4 fire departments. And because I know these people, they let me in, they let me get close, they trust me and they allow me to do my job. 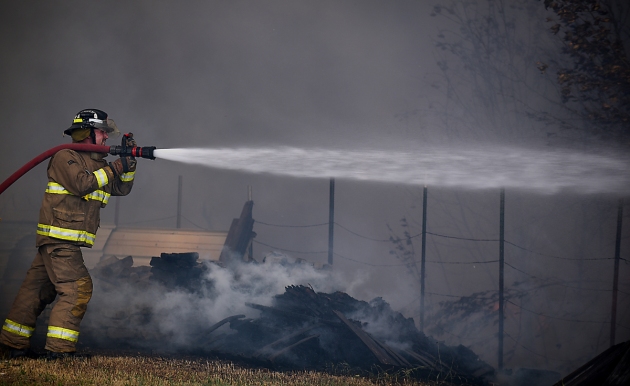 But there are other results of this so-called “campaign,” ones that have nothing to do with the newspaper. Results that are frankly far more important to me than photos. My father died when I was 25 years old. He got to see the start of my photography career, but only a little. I so desperately wish he could have seen who I grew up to be. When I think of my dad, the man he was, the Marine that he was, I know that if he was alive today he would see my work with these heroes and he would be proud of me.

My parents are the measuring stick against which I evaluate the trajectory and the fruits of my life. They are always with me, but they are silent. When one of the cops or firefighters or the military people that I know decides to trust me, even a little, I can almost hear my father’s voice. I can see his smile and hear him say “Good job.” 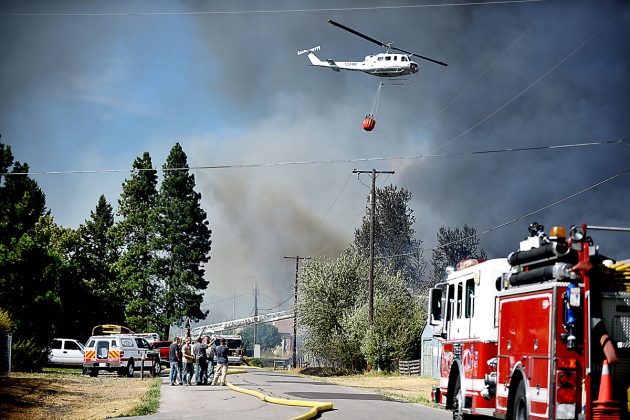 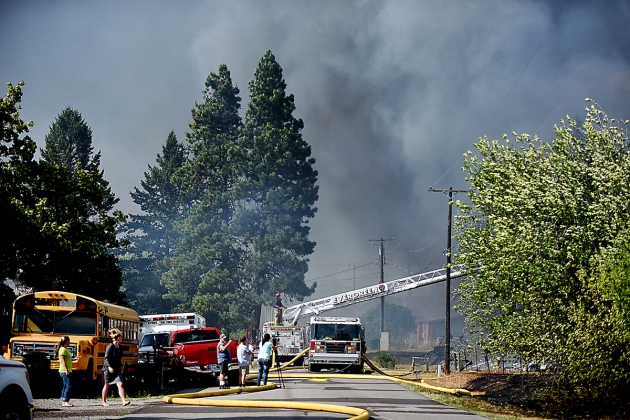 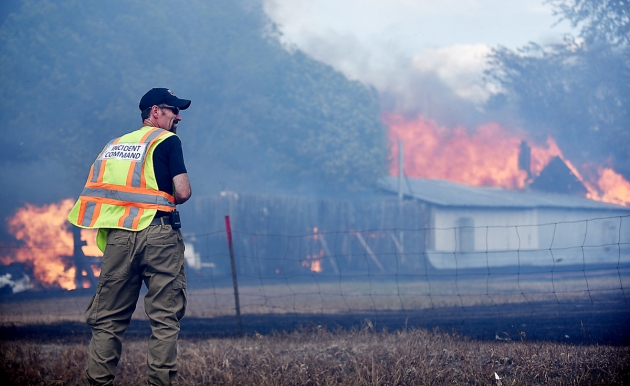 Evergreen Fire and Rescue Chief Williams looks out over the structure fire/grassland fire that filled the skies over Evergreen with smoke on Tuesday, August 5. (Brenda Ahearn/Daily Inter Lake) 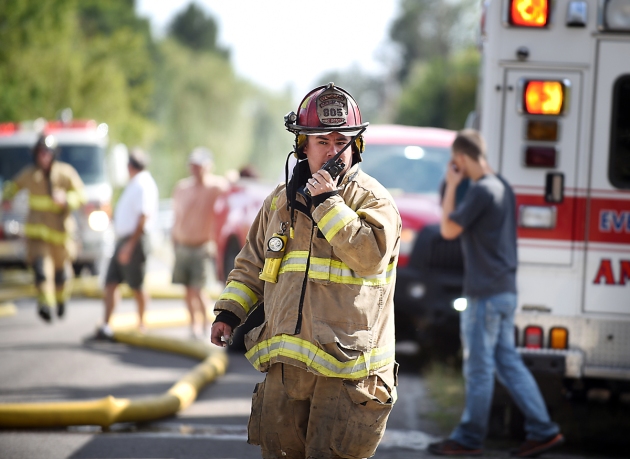 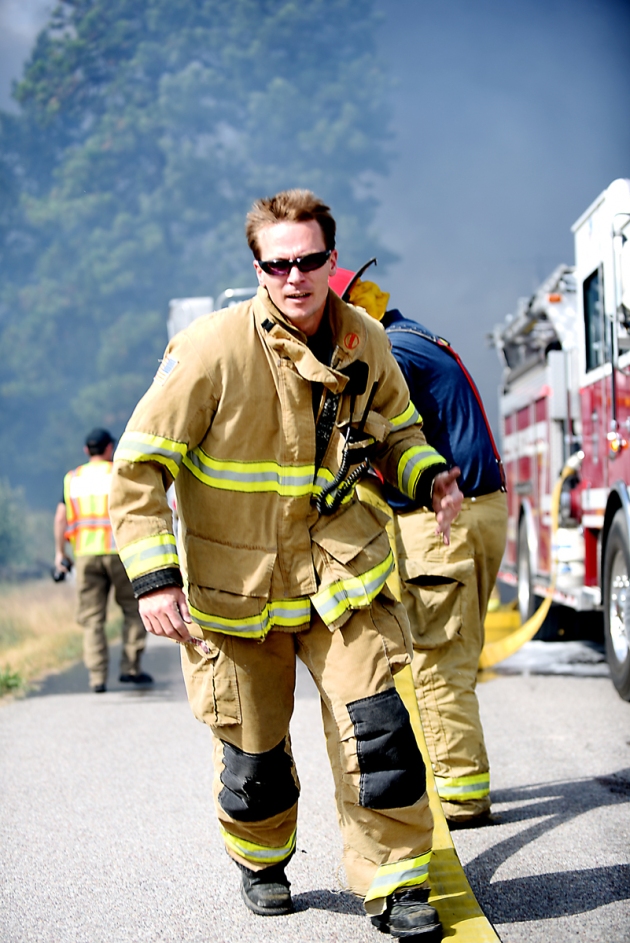 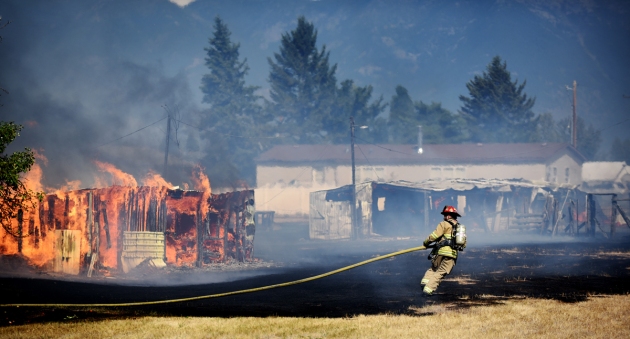 A firefighter battles a fire in an outbuilding south of the main structure fire on Wednesday, August 5, on Mountain View Drive in Evergreen.
(Brenda Ahearn/Daily Inter Lake) 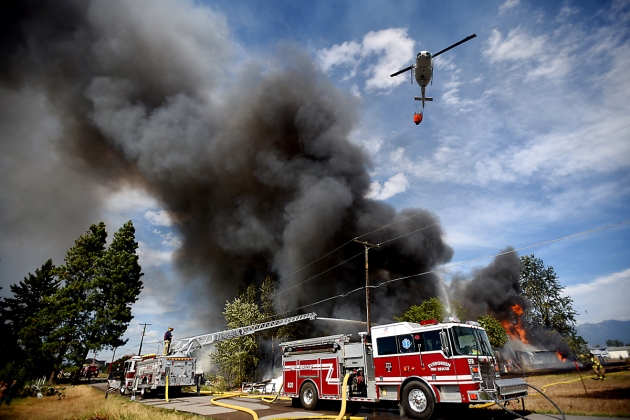 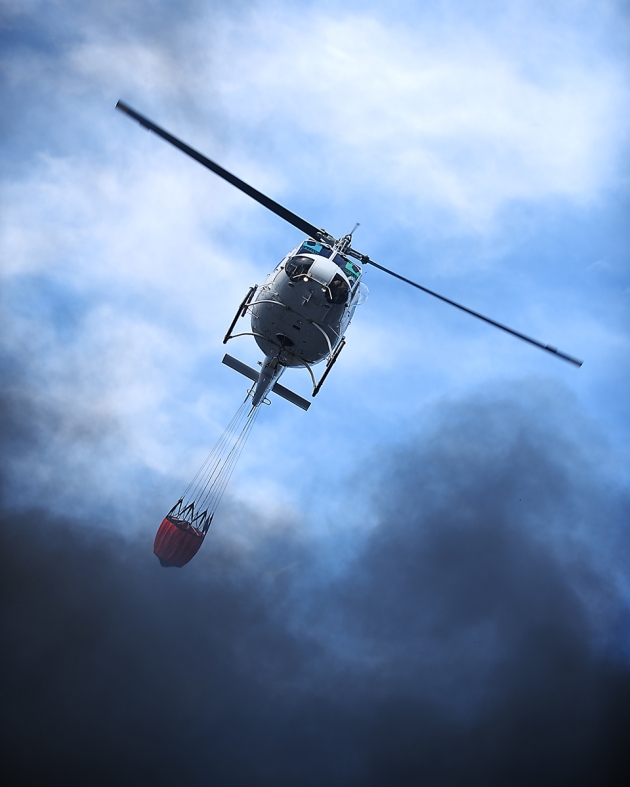 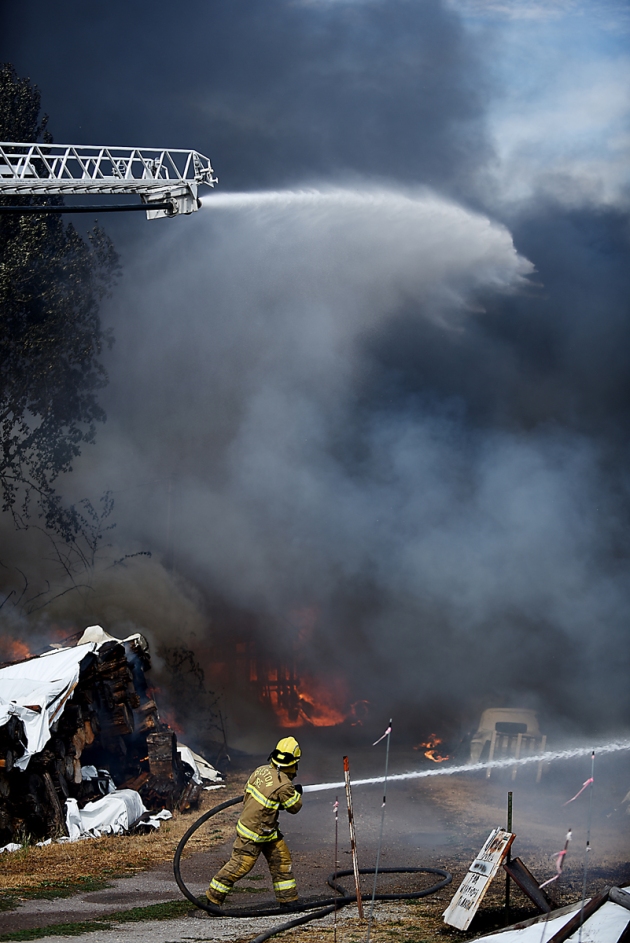 I do not remember the first time I came across the poem “If” by Rudyard Kipling. I loved it instantly. There are so many powerful life lessons in the 32 lines.

The poem was published in 1895. Nearly 70 years later my grandmother, Gertrude Ahearn, gave a copy of this poem to my father, Michael Ahearn, the day he shipped off to join the United States Marines. For the rest of his life, this was his favorite poem. But that is not the end of the family connection. Years after his death, these words still remind me of my father. Every time I read this, I remember the kind of man he was and the way he exemplified what a good man’s life should be.

Over the years I have made photo collages with this poem, but I have always tried to incorporate the entire poem into one photo. Without fail, the words tend to overwhelm the image. This is one of my early attempts. I did a series of photos of Calla Lilies and the shape of these reminded me of the word “if.” I like this, but I mostly feel the whole poem is just too much for one image. 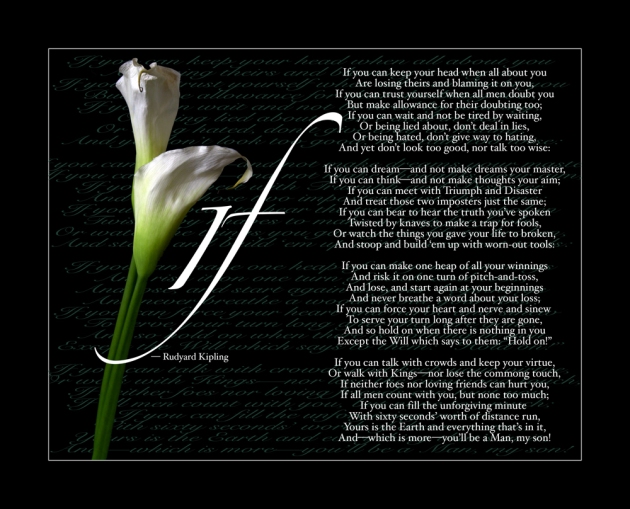 I have been thinking a lot of my parents this week and, of course, this poem came to haunt me again. I wrote it all out in my journal and decided it is well passed time for me to memorize the whole thing — I know it in pieces and parts of it, but if I were asked to recite “If” in order, I would botch the job. As I started thinking of the words I remembered the incredible sunset I photographed about a week ago. The mountains catching the last rays struck me as a worthy backdrop for a poem about personal integrity and strength of character.

To read the entire poem go to: http://www.poetryfoundation.org/poem/175772