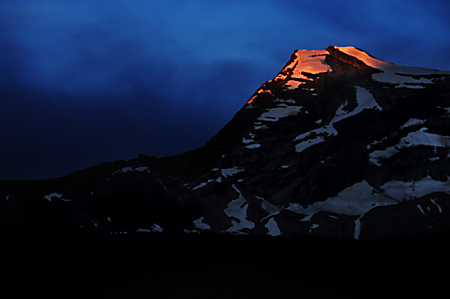 It’s only mid-afternoon, but already it feels as if today has been a very long day. I know that this is to be expected when I go to sleep at 10 p.m. and set my first alarm for 2 a.m. in the morning. Why the strange hours? Why else? Sunrise.

Sunrise is always worth the effort. Sunrise is always worth the risk. Set the alarms. Drag myself out of bed. Shower and make ready. I am up well before dawn chasing a dream in my waking hours.  To capture the spectacular moment when the light, all golden and glowing, first touches the earth. It is a dream worth waking up early for, but as I make my preparations I do so knowing there are no guarantees with sunrise.

Maybe all that magical light I’ve been dreaming of will stay locked away and hidden behind a dense and deeply frustrating cloud bank. Maybe the colors in my imagination are too vivid and the reality will end up softer, more muted. And we’re talking about sunrise in the mountains. Mountains tend to draw in their very own weather patterns which are impossible to predict even from so short a distance away as 60 miles. Logan Pass really isn’t that far away from Kalispell. But the mountains make all the difference. You can have bright blue skies here in Kalipsell and snow storms over in Coram. And vice versa. There is just no telling.

So I get up. Always take a shower, otherwise I’d be considerably more likely to fall asleep while driving in the wee small hours. Gather my gear. And go. I go hoping. My very version of the leap of faith.

This morning I did not get what I wanted at all. I wanted an East-side sunrise. This is important to me because I know Logan Pass will be closing even before coming snow forces the road closed. They are doing a lot of construction up there and the tourist traffic slows that down. I want a sunrise looking out over Saint Mary’s Lake.

Turns out, Logan Pass is open. Except at night. At night the road is closed from 9 p.m. to 2 a.m. and from 2:15 a.m. until 7 a.m. I’m up at the park pretty early, but I not early enough to meet that short window. I got to The Loop at 4:30 on the nose just in time to greet a guard telling me I could go no further. He was as kind as he could be, but I was highly disappointed.

Hours later the sun starts to come up. I wasn’t going to get the sunrise I had so wanted. This particular sunrise was shall we saw less than awe-inspiring. Light clouds washed everything out leaving the mountains and vistas flat, boring compared to how it could be.

But there was one moment. One moment to redeem the day. One moment to make the effort worthwhile. I had parked at the top of The Loop facing Heaven’s Peak (elevation 8,987). And that snow-capped mountain caught the very first rays of light. Just enough to light up the very top. One brilliant spot of gold against a vibrant blue sky and a mostly silhouetted base. Black and blue and flaming gold. Definitely worth the drive. Definitely worth the effort. Always worth the risk.

And hey, it’s not as if I turned around and left at this point. No-no. I went up to Logan. And I saw my first big horn sheep. Four of them. Very large. And not the least bit afraid of me. They let me get close.

I still want that East-side sunrise. And I know I have to go soon. Who knows, maybe I’ll be able to drag myself out of bed again that early on Saturday. Even if I don’t get exactly the photos I want I know I will leave the park with a deep sense of satisfaction. You see, even when I don’t get what I am dreaming of, I can be happy, even proud, knowing that I did not simply let the moments and opportunities pass me by. I would rather risk a sunrise that doesn’t quite thrill the photographer in me, than sleep in and wake up after the sun, wishing I had risen earlier. 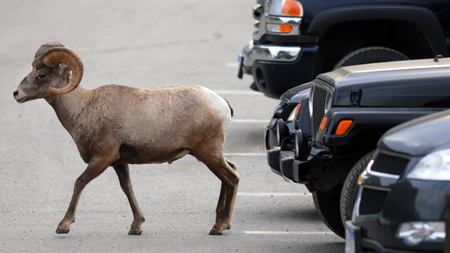 That's my jeep that this guy just strolled alongside of...I'm going to have my jeep in the newspaper. : )